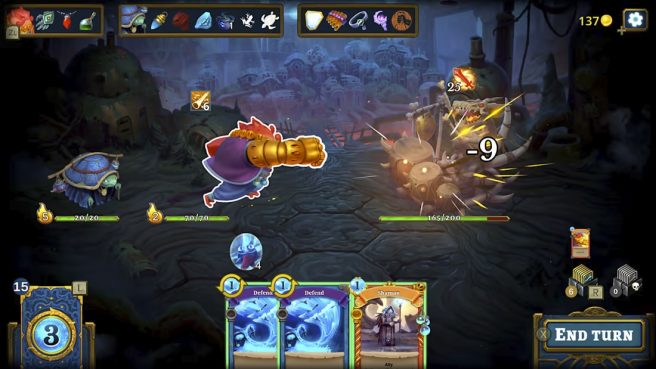 Roguebook finally has a release date on Switch. The roguelike deckbuilder will hit the console on April 21, 2022, according to an eShop listing.

Roguebook was announced in January 2021. We then found out this past February that the title would be making its way to Switch sometime this spring. Today marks the first time we have an actual release date.

Here’s some information about the game:

Embrace the challenge of a roguelike deckbuilder with unique mechanics from the developers of Faeria and Richard Garfield, creator of Magic: The Gathering. Build a team of two heroes, unleash powerful combos and defeat the legends of the Roguebook!

* LEGENDARY HEROES – Create a team of two heroes, each with their own cards and abilities. Combine their strengths to defeat over 40 bosses and enemies.
* BUILD YOUR DECK AS YOU PLAY – Choose wisely from 200 cards, 80 relics and 30 gems that can be combined. You will never play with the same deck twice.
* THE BOOK CHANGES EACH TIME YOU OPEN IT – It’s up to you to reveal the Roguebook’s mysteries with the ingenious ink system.
* EACH RUN COUNTS – Train your heroes and earn new cards and relics to take on the 20 difficulty levels in the Roguebook.

Roguebook will be sold via the eShop where it will cost $24.99. Check out the official website here.